A weekly luncheon is held at a restaurant in our fair twin cities. I usually attend. This week, my paralegal attended in my absence.

She sent me a text around 1pm with this photo of her car attached: 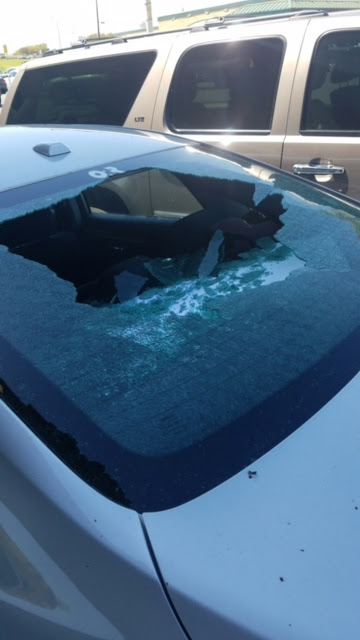 Theft, right? Nothing was missing.

While she and a couple of other folks stood in the shade of the interstate which passes over the restaurant parking lot, they tried to figure out what caused her entire back glass to shatter. Then they witnessed a rock careening off of the interstate overpass, whacking the rooftop of her car.

In the span of an hour, at least two rocks flew off of the interstate overpass and landed in roughly the same spot of the parking lot below. There is a pattern here. Or, possibly a kid with great aim and a slingshot has it out for my paralegal.

She went inside and told the manager. “Just to let you know, to prevent things like this from happening in the future . . .” She wasn’t asking that the restaurant reimburse her. She wasn’t threatening to sue. She was just a concerned citizen warning a business that a danger existed in their parking lot.

“Yeah, an employee’s car was damaged out there. It’s our lot but the city owns the land.”

As an injury attorney, I now know these things:
1. It is the restaurant’s parking lot.
2. The city owns the land.
3. A dangerous condition exists in the parking lot.
4. Yellow painted parking-space lines indicate the area is a safe place to park (and, as such, to leave one’s vehicle and walk toward the restaurant).
5. The restaurant has actual knowledge and has been put on notice that the dangerous condition exists.
6. The restaurant does not seem to care.
7. No signs exist warning drivers and pedestrians of the danger of flying rocks.
8. No metal cover/shield has been erected to protect cars and pedestrians from flying rocks.
9. None of the most susceptible parking spaces have been eliminated.
10. If #1 through #9 can be proven, a traumatic brain injury resulting from a flying rock hitting my would-be severely injured plaintiff in the head in roughly the same location as this parking spot is worth a substantial sum in damages.

As a juror, I know these things:
1. A metal roof (i.e., shield) isn’t that expensive to erect.
2. Paint is cheap.
3. Signage is cheap.
4. I would like someone to tell me, before I park in such an area, that a risk exists of substantial harm to my automobile or my family or me.

As a person, I know we owe a duty to one another to warn each other of potential harms. A back glass is over $300 to replace. A dishwasher in that restaurant, earning $7.25 minimum wage, has to work well over a full week to recoup his costs. A human being hit in the head with that same flying rock that flew fast enough to bust out a back glass would never have the opportunity to recover his costs.

Personal injury attorneys exist for a reason. We get a bad rap, but it is the work we do for our clients that prevent future dangers from befalling other people.

Be careful out there (and don’t park under interstate overpasses).